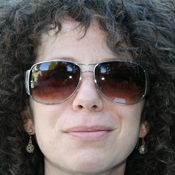 Julie Glick was born and has lived most of her life in Toronto. She hails from a classically oriented musical family, but rebelled and became a painter. As a child she went to private school in London England and as an adventurous teenager moved to New York City with a friend. Until recently, Glick owned and operated her own gallery representing other artists and presently she has the privilege of hosting artist interviews for an online version of a museum and gallery magazine. Glick still lives in Toronto, devoted to her husband, their dog, and much to her surprise, classical music.

Julie Glick has studied at the Ontario College of Art, the University of Toronto, the Avenue Road School of Art and semi privately in the studio of Catherine Hobart and Klaas Hart. She has participated in well over 20 solo and group exhibitions and her commissioned portraits continue to be in high demand. Glick’s work can be found in private and corporate collections in Canada, the United States, England and Hong Kong.

Oct. 1994 Contributing artist to The Quilt Project, at The Koffler Gallery, Toronto