Cynthia Fuhrer was born and raised in Edmonton. She attended art school at Grant MacEwan Community College, the University of Guelph and the University of Alberta where she received her MFA in painting in 2003. Cynthia works in the local art community as a preparator at the Art Gallery of Alberta, an instructor at Grant MacEwan, and a lead artist educator at the Nina Haggerty Centre; a centre for adult artists with developmental disabilities. She has received several grants and awards, including project and travel grants from the Canada Council, The Alberta Foundation for the Arts, the Edmonton Artists Trust Fund, and The Edmonton Arts Council. Presently, Cynthia is working on a figurative and portrait project with funds awarded by the Edmonton Arts Council.

My portraits lack any of the ties to traditional portraiture where the aims are to produce works that convey a strong connection to the sitter’s likeness or to a specific person’s identity. In my portraits, they can go so far as to even lack features linking them to a face at all. Existing between figurative and abstract modes, the figurative element is balanced with the inherent properties and materiality of the paint resulting in a unique surface and form. The figurative element arrived at via process painting creates a tension: the control and non-control of the material and how the resulting image can function with elements of both. My aim is to find a balance between that which is depicting the form of a human, and what it is to be human. 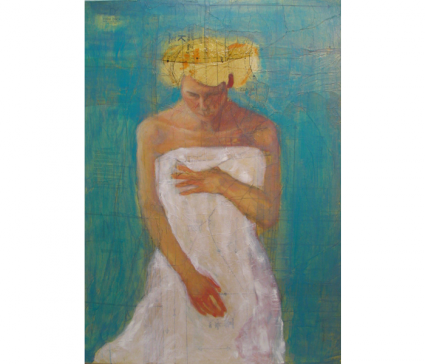