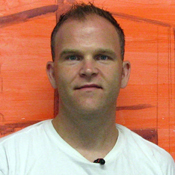 James Olley’s paintings are as equally socially analytical as they are formally invested. Possessing an arresting eye for color and a brave, take-no-prisoners approach to pushing swathes of oil paint around, what motivates Olley as an artist, however, is his keen interest in examining the society that surrounds him. His aim is to add something to the general understanding of our social context, by producing paintings of places, people and things we tend not to think of in art, because they would normally be too private, too intimate, or too banal. And, by his use of richly expressive brushwork and an eye-popping, candy-bright color palette, he can make us focus on these subjects without telling us first why we must do so.

In the first place, the paintings speak to us so loudly that it takes time to soak in the subtler, social-realist edge in the work, and begin to gather what the painter is driving at; this also allows the imagery to bide its time with us, and avoid having to rationalize the intrusion into the seemingly hermetic lives of his cast of characters. Whether in an individual portrait, a scene with one or more figures, or a landscape, the frontal assault involved maintains its force, so as to keep the paintings from losing their visual edge; furthermore those same formal qualities in the work act as a slow welcome – as well as an intensifier – to our consideration of his multivalent subject matter.

A graduate of the University of Waterloo’s MFA program, Olley was born in Toronto and now practices in Kitchener, Ontario. His roots in Canada’s urban environments, as well as its open spaces and countryside, have inspired a strong responsiveness to the idea of space in itself as a complex phenomenon, and to its depiction. Olley effectively analogizes the tension and dynamism that pictorial composition can produce to that of the social body politic; in this proximity, community, and cultural characteristics combine to form a sort “compositional” whole. His strategy is to equate reality and art so as to illuminate both from either side. As for instance in the recent painting Water Baby, we see a young woman treading in a body of water of indeterminate size; it could be a backyard pool, ocean or a lake in the country. The electric sparkle of the water around her, the pastel-hued reflections of her arms on the surface, and even her centralized, eye-grabbing facial expression, are all surrounded by the rolling movement of the thick black paint Olley has brushed into the appearance of the convincingly fluid water she is immersed in. The viewer is close up, and therefore, implicated in the drama of the piece. Are we her boyfriend or husband? Someone else she knows? A lover, a stranger, or a person to whom she responds ambiguously? All of these are possible readings of the piece, and interpretations Olley allows us to consider.

It is his range of subjects, along with his formal quality, that accounts for the growing popularity of his work. Already teaching at the university level at his Alma Mater, since 2002 Olley’s work has been widely shown across the country. His first solo show came in 2008, the same year as his inaugural one-person show at Angell Gallery. Well-received by critics and patrons alike, Olley stands in good stead to continue his exploration of space, society and of the people – semi-real and quasi-imaginary – who inhabit them. 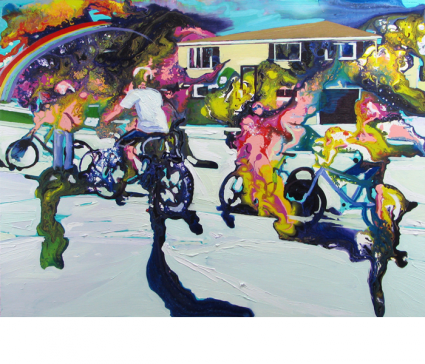 and pencil crayon on board