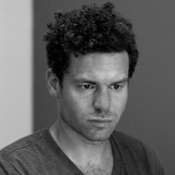 Photo and video-based artist Geoffrey Pugen is a masterful manipulator of imagery, in both the technical and conceptual senses. And while his level of proficiency with camera, computer and printing are all self-evidently high; it is not mechanical skill but the variable substance of the content of his art that he is most interested in communicating. Generally, in encountering his work the first thing that happens is that we immediately perceive its total strangeness. The bizarre juxtaposition of things and ideas is a constant within his practice, frequently in ways that emphasizes the work’s confrontational, aggressively symbolic, and sometimes frankly disturbing content. There is also a visibly tremendous consistency to Pugen’s “oeuvre.” Whether the image in question is of a ramshackle, ghostly tree house set in front of a fog-enclosed urban dystopia, or just a girl dancing in front of her black cat (which certainly recalls the idea of witchcraft), there is a universally individuality present to the weirdness in the scenes; we have a sense that the real and the unreal have collided to great visual effect.

And although he does not portray explicit physical violence in action, there is in general a kind of schismatic, jarringly subjective violence written into the fabric of the world itself that he has invented. It is as though, without being too exacting about what precise response would be the correct one, he wants to guarantee a strong, curiously visceral reaction to begin with, to make sure of fixing the viewer’s attention on his pictures. And only then, after we are transfixed and grasping at basics that we begin to be drawn in, to glimpse the strong, though zany logic of what the artist has composed.

The procedure Pugen goes through to arrive at this end is brave, in that it is fundamentally risky. Normally, most artists do things the other way around, first visually pleasing the audience and attracting them. Only when a seeming security has been achieved, is the rug pulled out from under any complacent set of expectations we may have. Pugen prefers a route diametrically opposite to the norm. He risks the charge of sensationalism to derive a set of benefits that can result only from material that is immediate, and fierce; this is evident in his The Morning After, where we see a pair of legs, cut off by the cropping of the image on the left, coming into the frame of a scene set poolside in what appears to be L.A.; palm trees, blue sky, complement the image. David Lynch and the Noir and “Hardboiled” genres are invoked through atmosphere alone. And there is a brilliant little detail high on the right in the form of the moon, barely visible. But the star of the show is a white convertible half submerged in a swimming pool in the center of the piece, as though the owner of the legs had just ended one very long adventurous night of driving around by dunking the car.

But at the same time, those legs may only abstractly be “legs”, and not those of an actual person; even if they are, the person may be alive or dead; the whole thing may be incongruous. Perhaps we are advised to think of the image as totally unreal, as simulation, a simulacrum. In any event, it is the artists’ intention, full of dark comedy and a precise brand of ironic gallows humor, to suffuse our thoughts with these ideas, references, and the desire to know what’s going on. Needless to say, he won’t tell us. In this sense, Pugen’s work is fundamentally abstract: narrative is cut off at the knees, just like the legs in “The Morning After”.

Since receiving his MFA from York University in 2004, the Toronto-based Pugen has exhibited internationally to wide acclaim, and is also a regular on the film festival circuit, screening his video work across the country, in the U.S. and England. 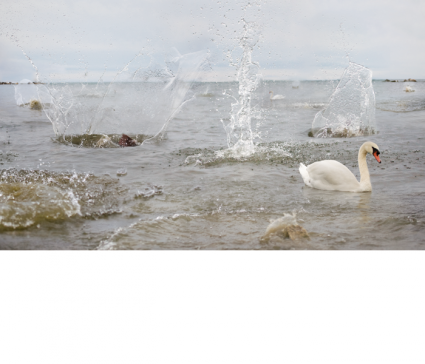