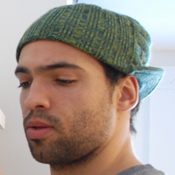 b. 1982
Zane, an identical twin, was born in Toronto on November 28th, 1982 to Canadian and Jamaican parents. In 2002, he undertook a bachelor of Fine Arts, studying under Montreal artists Susan G. Scott and Marion Wagschal. In his fourth year, he received an honourable mention in the Kingston Prize for Contemporary Canadian Portraiture for his hyper-realistic Painting, "Mark Ainslie". In June 2006, he received his Bachelors Degree in painting and drawing, and is now working primarily with encaustic wax, creating hyper-realistic portraits. While Zane continues to work with portraiture, he has also branched off into a new series of representational façades called “Rusty Boat Side”. Since 2008, Zane lives and works in Mont-St-Hilaire, Quebec.

Portrait Series:
The face is the fundamental canvas for communicating expression; sometimes it needs a little paint to be objectively bold. To native tribes, painting on the face was a ritual for awakening one’s personal power, which would amplify their inner spirit and was an element of valour in the celebration of life. The act is ancient but this idea of puissance in a facial paint job is the primal concept in this body of wax portraits. These images exist in the context of the modern portrait. Painting on the face is just one way of braking down that barrier of fear that inhibits us from being ourselves. Metaphorically, the paint on the face resembles a deconstruction of the masks that make up who we are revealing a truer intimate personage. In each portrait, the face painting is perfunctory in its application, yet relevant for taking on the contemporary jamboree of the everyday quest- to find out who we are in life. These works drip with modern rhetoric; they are the tribal masks of today’s fashionable fellow. At the soul of these portraits shouts an empirical motivation to augment our appearance and express ourselves with passion. 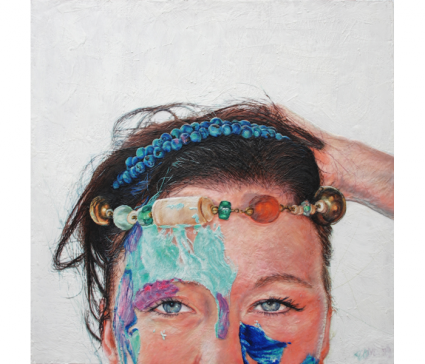