b. 1970
Sky Glabush was born in Alert Bay, British Columbia, and grew up alternating between the West Coast and the prairies. He moved to the Netherlands in 2000, where he was artist-in-residence at Haagweg 4 in Leiden for six months and soon after established a studio in Amsterdam and began to exhibit with Suzanne Biederberg. Glabush returned to Canada in 2003, and has accepted a faculty position in Studio Art at the University of Western Ontario.

Sky Glabush has had numerous exhibitions including shows in Calgary, Edmonton, Vancouver, Toronto, New York, Amsterdam, and Melbourne. He has had solo shows at the Mackenzie Art Gallery, the Mendel Art Gallery, and Arch 2 Gallery (University of Manitoba). His work is in many public collections among them the Canada Council Art Bank, Mackenzie Art Gallery, Mendel Art Gallery, University of Saskatchewan, University of Alberta and the Bank of Montreal. Recent shows include “Renting” at MKG127 and “Hinterlands” Harbourfront. Glabush has an upcoming solo show at the Art Gallery of Windsor in 2011. Glabush is also an essayist and critic who contributes to publications such as Border Crossings, Canadian Art, and Akimbo, and has published a number of monographs on contemporary Canadian artists. He is represented by MKG127 in Toronto. 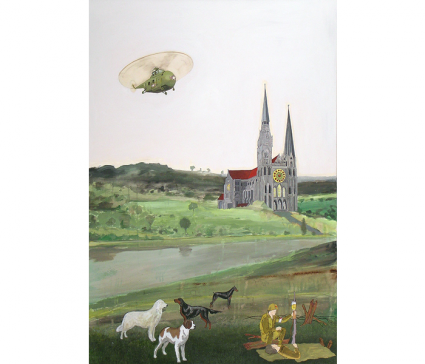